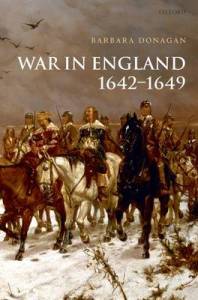 In my fall semester survey on early modern Britain, I’m mixing things up by teaching from just a textbook (Bucholz and Key’s 2nd edition of Early Modern England) and a monograph: Barbara Donagan’s War in England 1642-1649. The book is fabulously well-written, wide-ranging in its treatment of the experience of war in the era and just plain fun. It’s also quite reasonably priced in paperback! (We also have an electronic copy in the library collection so no student can use the excuse, “My student loan money isn’t in so I can’t buy the book!”)

It’s also an ambitious book to hand to many students who aren’t history majors or are only in the second year of their program, but I wanted to get back to teaching some secondary literature before the senior level. (Like many other premodernists, I spent a lot of classroom time working on the challenge of close reading primary sources.) This book appeared to me a good opportunity to do so.

However, now it’s August and I’m wrestling with my course plans for the fall. I have a term to get them up and running on major themes and events in early modern British history. I’ll try to achieve some of that by hammering home the need to do their textbook readings with pre-selected and circulated discussion questions on the textbook opening every single class session.

To build to the challenge of tackling the monograph, I need to get students working with another secondary source in the first half of the term. I think I’ll probably give them a short list of journals they can run through and choose one article relevant to our course to read and demonstrate some simple analytic ability. I’m planning an assignment that would require them to identify the article’s argument, key examples or evidence, and then relate it back to our textbook to see how the two treatments differ in any way.

With that achievement under their belt, we can begin reading the monograph. The course outline will include a reading schedule so that students know by what dates they ought to have read what parts of the book. I’ll also start leavening in some discussion questions that tackle the monograph’s early themes (such as the justification of war, military education and the concept of a citizen-soldier).

Then I need to craft the assignment scheme for the monograph. I’m leaning toward having students sign up for one chapter and carrying out either a compare/contrast analysis with one other work of scholarship on the same topic or use that as the basis for a more conventional research assignment. (You can see that my heart isn’t in the latter. I’m tired of reading badly plagiarized or clueless essays on randomly tweaked topics.)

One of my problems is that students at this level still have great difficulty in identifying appropriate scholarly sources. They tend to turn to the web first. To be honest, Google’s top five results probably provides the largest number of research sources for many student essays. A few of the more enterprising go with something from the top five results from Google Books. Another chunk just pick up something random from JSTOR or Historical Abstracts (failing, despite directions, to check off the box labelled “Peer-Reviewed”). So part of the challenge is to get them to identify a good scholarly source before we even get back to the analytic assignment!

Perhaps if I have them crowd-critique their choice of compare/contrast sources (which could be an article from a list of acceptable journals, a scholarly monograph or chapter in a scholarly collection) by requiring them to post their choices to the class’s discussion list by X date before the assignment is due (and comment on at least two other of the selections). Providing them with a clear list of criteria as to what constitutes an acceptable scholarly source will also be part of the solution.

The final capstone might be to have presentations of their work, either as files to the class website or in-class presentations. The latter would be preferable but given that I already have over fifty students signed up for the course, that’d take more than a week of class time to accomplish. Hmm. . . .

Finally, if I advise students that I’ll reuse the discussion questions for the exam, they also would have incentive to keep up with preparing for those. So I won’t have to pick up and mark discussion question responses (they can just work from their notes or what-have-you) which would be a daunting addition to the marking scheme.

I might have a plan here, but any suggestions you can provide for how to best teach from secondary sources like a monograph would be greatly appreciated. I have a few more weeks before this all has to be “nailed down” but I want the course plans done and out of the way as soon as possible, so I can keep up with my other writing and editing obligations.

4 responses to “Teaching with Monographs”