As we’re heading down to the wire to wrap up Star Wars and History, we’re dealing with all the small snafus (“This image’s not high-resolution enough to reproduce properly – we need a high-quality version or replacement!”) and final bits of tweaking with captions and other elements before we even get to the proofs. It’s a surprising amount of work from our end and much more, I’m sure, from the publisher’s. We have spreadsheets tracking contributors, chapters, artwork and edits: almost more detail than I can track. Even then, I have nightmares that I’ve missed something vitally important.

However, it’s less those errors than might or might not be than the omissions that I know have been made that leave me almost sleepless at night. There are so many fabulous historical elements that could have been in the collection, even in my articles, but didn’t make the cut. Like young Victoria’s challenges facing the expectations of queenship, a story that I deleted earlier, there were many fascinating historical women whose stories could have been shared in my chapters on teen queens and women resistance leaders. 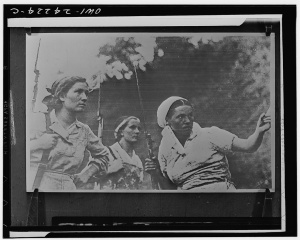 I’m attempting to avoid second-guessing my choices but it’s difficult. Just this week I stumbled upon this fabulous historical image and sent it to my co-author for the chapter on women resistance leaders whining that I wished we could’ve used it. She calmly pointed out that we’d had to draw the line on some historical examples and Soviet women in World War II had been one of the examples we’d cut in favour of the clear parallels with some of the French resistance leaders.

Which is wise and true but, oh!, not always easy to accept. Ah, well. I’m going to try. Tomorrow there will be more images to wrangle and more details to clarify. I’ll try not to fret over the details that have already been dealt with. Wish me luck!

Comments Off on In the Details