One case I return to often in The Old Bailey Online is the trial of Elizabeth Cranberry for the murder of Thomas Biggs. It is a case of poisoning, long seen as a women’s weapon, but it’s so much more than this: the more you dig, the more you see an unhappy household and the possibility of a poorly-blended family.

I first stumbled upon this case when searching out stepmothers’ stories and looking up every possible use of related terms. Since step-parents and in-laws were interchangeable terms, there’s some confusion in the terms. Elizabeth shared a bed with Hannah Tudor in the house, the first person giving evidence in the case, revealing some interesting family dynamics:

that on Friday Night the Prisoner and the Deceased (who was her Father-in-Law) had many Words together, insomuch that he threatned to turn her out of Doors; and she told him he should not: that on Saturday Morning while the Deceased’s Wife was feeding of him, he complained there was something in the Porridge, and that she told him there was nothing to her Knowledge for she clean’d the Sauce-Pan and boyled it her self, and if there was any thing it must be in the Oat-meal; that he eat two or three Spoonfuls more, and complained again, whereupon she went and took the Spoon out of her Mistresses Hand. and stirring the Milk found something in it, which she said look’d like Lime, and his Son said it look’d like Starch; that stirring it to the Bottom she found a great many white Specks

So either Hannah, testifying here, or Elizabeth, was Thomas’ stepdaughter. Malcolm Gaskill saw that as Hannah Tudor’s relationship. When he discusses this case in Crime and Mentalities, he assigns Elizabeth Cranberry the role of household servant. Therefore, her poisoning of Thomas Biggs would be not just murder but petty treason. However, in the passage that I quoted above, Hannah is the one describing Mrs. Biggs as her mistress and when she talks about the other witness, it is as Thomas’ son, not as her step-brother (or, more likely, brother-in-law given the earlier phrasing in this case).

Whatever Elizabeth’s and Hannah’s relationship to the Biggs, something was clearly amiss with this meal. Thomas demanded to search everyone’s boxes and only Elizabeth resisted. When her belongings were finally searched, a packet of white powder was found and was brought to a Dr. Perkins who testified that it contained white arsenic, white vitriol and bole armoniac. Given that Elizabeth had previously been a servant to an apothecary and admitted that she had the materials to help in washing gloves, the case seemed clear-cut to the court, and she was sentenced to death. 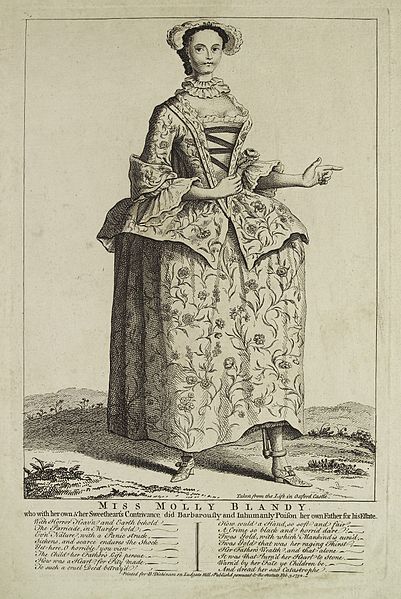 But I wonder at the possible family dynamics unexplored. If Elizabeth Cranberry was Thomas Biggs’ stepdaughter and not his servant, her mother was his wife: the same woman who admitted she mixed the porridge herself and “she made a Saucepan of Milk-Porridge, as usual, and left her Daughter (the Prisoner) to look after her Nursery while she fed her Husband (the Deceased) that he complained there was something in his Porridge twice, &c”. We learn that Mrs. Biggs was the one her husband sent to the doctors when he fell ill, who conveyed his order to feed Mr. Biggs oil to induce vomiting, and who oversaw the unsuccessful treatment.

To construct a storyline where Mrs. Biggs murdered her husband and framed, or at the very least allowed Elizabeth Cranberry to take the blame, is deliciously simple – probably much more appetizing a prospect than that mess of porridge that poisoned Thomas, whoever truly was the culprit.

Comments Off on Poisoned Family, 1720