Did you thrill to the trailer for Star Wars VII: The Force Awakens? Then you remember seeing this daunting hulk of a Star Destroyer on the desert world of Jakku:

According to other reports, these wrecks are relics of a fierce New Republic engagement with the Empire’s forces fought a year after the Battle of Endor in The Return of the Jedi.

Such monumental remains have their echoes in our own history only instead of star destroyers, ours are naval vessels such as the Graf Spee whose shattered remains cast an impressive shadow that still resonates today and provide interesting hints about how The Force Awakens could unfold. Here’s Historical Prediction #1 for The Force Awakens: thirty years on, that wreck is still of value. That’s a lesson we learn from the story of the pocket battleship Graf Spee.

It was the autumn and early winter of 1939: the opening months of World War II. The German pocket battleship, Graf Spee, preyed upon British merchant vessels: sinking or capturing nine before the British were able to turn the tables. Three British cruisers, the Exeter, Achilles and Ajax wreaked havoc upon the German ship in what is known as the Battle of the River Plate. They forced Captain Langsdorff to seek refuge in the neutral Uruguay harbour of Montevideo, on 13 December, 1939. 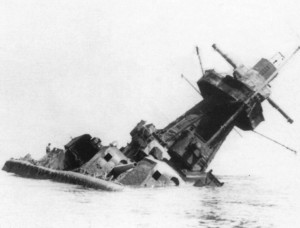 the Germans couldn’t linger long in the port under the terms of the Hague Convention. Technically, they were supposed to be out of the port within a day! The captain stretched out his reprieve, offloading prisoners of war from his earlier successes and communicating with his superiors back in Germany. It was all to no avail as the three British cruisers waited not far off. Rather than risk his ship’s capture, Langsdorff chose to scuttle, deliberately sink, the Graf Spee in the shallows on 17 December, depriving the British of a valuable prize but also his German masters of a defiant end.

Just because the ship went down didn’t mean that all was lost. If the British could get access to the wreck, still largely accessible to the tugs that operated in Montevideo and divers who could pry out prizes, they could plumb some of the secrest of the German navy. But Uruguay was still officially neutral: the country didn’t declare for the Allies until January, 1942, after Pearl Harbor. Nevertheless, the British devised a clever plan. The German government was persuaded to sell the wreck of the Graf Spee to one Julio Vega in 1940. 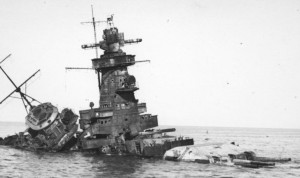 reality, the purchase was orchestrated by the British ambassador to Uruguay, Sir Eugen Millington-Drake. Parts of the wreck were then removed and studied by the British during the war. Even today, the wreck remains a highly sensitive property contested by private salvagers and the German government as recently as 2008. That Star Destroyer that we see in The Force Awakens could also be prized by salvagers as well as the rival powers of the Resistance (the remnants of the Rebellion) and the First Order (the Empire’s aftermath).

Comments Off on Star Wars and History: TFA Prediction #1